OK, a lot has happened since my last post.  We ran some really cool loads and had some great experiences.  First, we went to “Desert Trip” which was definitely the concert event of the century.  The festival was at the the Polo Grounds in Indio California.  The same place they hold The Coachella Festival.  Hence, Desert Trip was nicknamed “OldChella”. The artists were Paul McCartney, Bob Dylan, The Rolling Stones, Neil Young, Roger Waters and The Who.  What an amazing three days.  We stayed with Shannon, one of my favorite people on the planet who lives less than a couple of miles from the Polo Grounds.  Our son Tyler also came up to join us on Saturday night and Sunday.

I mentioned some cool loads.  One was for the CDC (Centers for Disease Control)  It was weird, all hush hush and with very high security.  We picked up at this obscure high security warehouse near Atlanta and drove to Cheyenne WY were we had to rendezvous with the US Marshalls at 6 am.They met us with two SUV’s and four Wyoming State Patrol cars and escorted us to a secure facility (we still did not know what was going on or what we hauling)  We arrive at a fenced in facility with Humvees and armed military on patrol.  We pull up to a blocked gate and hand our ID’s to the guard.  He has the humvee moved out of the way and has the gate opened and we pull in and around the building.  We pass the Homeland Security Command Center and there are police and military everywhere.  They have us back into a loading dock and an Air Force MP finally tells us what is going on.  It is an “Epidemic Event” practice run.  If there was a zombie apocalypse, we were hauling the antidote.  So we drop our trailer and they tell us to come back in couple of days to haul everything back to Atlanta.  We drove down to Fort Collins and spent two days with our youngest son and his wife.  A great time. 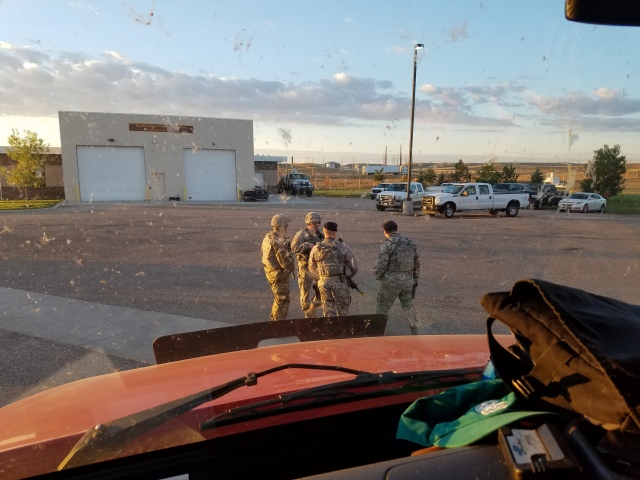 Waiting for the Zombie Apocalypse

Another cool load we had was a load of very high end server racks for a Microsoft Data Center.  Cross-Country load that paid very well but was a little scary due to the value. 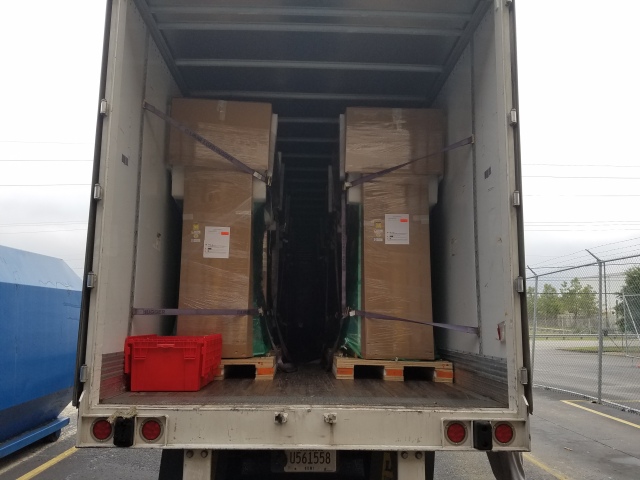 Does this LOOK like Fifteen Million Dollars to you?

And then we had another load that was just shelving systems for the Navy.  What was cool was where we delivered to.  Whidbey Island Naval Air Station….out on the flightline.

F/A 18 Growler getting ready for flight

We also got to spend a lot of time at home with the kids and grandkids, we also got the chance to see a couple of our favorite humans.  My nephew Evan who just started college at Grand Canyon University in Phoenix and my “neice” (really my best friends daughter…but she is family) Lauren who we stopped to see for breakfast in Abilene TX where she is in college.

We miss you Lauren

Now it was time to actually get some work done.  As we approached Thanksgiving we started to look for something similar to the Amazon Gig we ran last Christmas.  It kept us running and set us up for a slow 1st quarter.  Pickings were pretty slim.  We did get a call from a broker who wanted us to run UPS loads and we agreed to do it. Money was not bad and they were paying tolls.  Basically the down time was killing us, we would run a round trip to Chicago or Philadelphia and then we would sit waiting for them to find us our next load.  Horribly disorganized.  After about two weeks we were losing patience and we got a call from a broker we have worked with before and liked a lot.  They had a number of Postal Service runs out of Tampa Florida that they had to cover right away.  They gave us a couple of options and we chose to do the round trip from Tampa to Austin TX.  It would start in 3 days.  They were getting the paperwork done and called us back, could we head out today to pick up in Tampa tomorrow morning very early to Kansas City.  HECK YEAH!  They paid us to drive the 600 miles empty to Tampa and we got moving.  They also needed more teams so we called all our friends teaming at F2F.  All four teams jumped on it.  We would pick up and deliver about 24 hours later in KC then re-load and head back to Tampa to deliver the next morning, then have about 20 hours off and start the loop again.  Ken and Kathi were doing the Austin run with the same schedule as us so we got to spend some awesome time together on the days off.  Any excuse for beach time in December.

Then home on the 21st for Christmas with the family.  Even with totaling a truck and all the down time we will remember 2016 as a great year.  Looking forward to what 2017 has in store for us.