OK, so we got up the next morning and called our fleet manager to check on the repower.  My FM was not in and so I got another guy who was LOSING HIS MIND!  It was kind of funny, this guy is going to have a stroke.  Turns out he had not checked messages from the night before and was not even working on a repower for us since he was not aware of it.  So I got him to calm down a bit and told him we would wait to hear.  An hour later we got a message on the truck computer that a team was on the way and would arrive at 2:00 to get our load.  We had a nice lazy morning and Anne reorganized the cab.  Tim and Amy, a great husband and wife team who have been with USX for 3 years showed up 1/2 hour early.  They have a 2011 Freightliner Cascadia and is was awesome to see how they had theirs set up.  I called breakdown and they wanted to send a wrecker to tow us 50 miles back to North Platte, I suggested we try to drive it and they agreed.  So we bob-tailed to North Platte and made it with no problem, stopped at Walmart to restock the food cabinet and then stopped by the repair shop to make sure they were going to get us in.  They had told us Friday originally but now said Thursday afternoon.  That was good news.  We headed back out to the freeway to park at a truck stop.  We had gotten a call from Mike and Peggy who I mentioned earlier we met in Tunnel Hill, they were running a load from St Louis to Sacramento and would be coming through North Platte that evening.  They met us at the truck stop and we all went out to dinner together.  It was great to see them.

So today we got up and I ate my Cinnamon Toast Crunch cereal (tasty)  We then both had showers and waited until about 1:00 to fire up the truck to run it over for our 1:30 repair appointment.  We got a half block before the red “STOP ENGINE” light came on and the power just about shut down.  I had been debating whether I had made the right decision to give up the load.  Decision was now confirmed as a good one.  Called breakdown and they sent a wrecker to get us and tow us to the shop.  Then they put us up in a pretty nice hotel where we hope that the truck will be fixed tomorrow.  We will see. 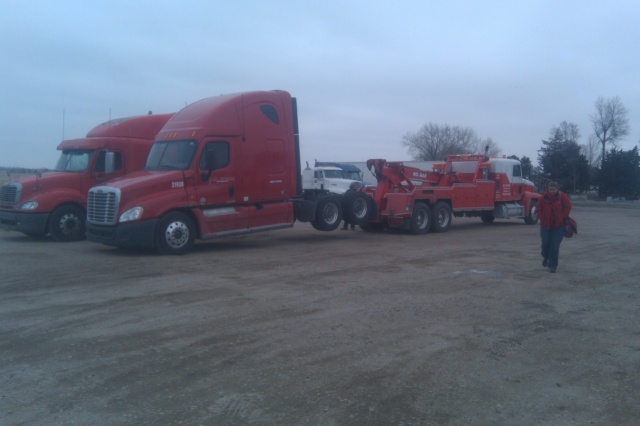 This entry was posted in Uncategorized. Bookmark the permalink.

1 Response to Looks a little different than last week!