Well, the truck is supposed to be fixed by this Friday.  Not really holding my breath as a dealer never delivers on time.  I suspect early next week JUST in time to be shut down for Thanksgiving.  Uggh.  We are putting in a used engine because we could not justify the $10,000 difference in a rebuild.  If the truck is ready I will probably go out on a shake down cruise solo.  A day out and a day back early next week to make sure everything is running OK.  We will then hit the road hard after Thanksgiving so we can start to rebuild our savings.  We have been down for seven whole weeks, five down really since we were in a rental truck for two weeks,  and really ready to get back to work.

So, Farm2Fleet took pity on us.  It MAY have been my incessant pitiful whining but I was going crazy not working.  So Bill put us in a rental car heading to Houston to pick up two straight trucks for the Expedited Division.  Expedited freight is a whole other world from what we do.  They are also called “Hot Shot” trucks.  Basically a 24 foot UHaul type truck with a full semi-truck sleeper attached.  Anne fell in love with the easy backing.  Spent the night each way in Louisiana and I LOVE cajun/creole food.  I will go very far out of the way for great gumbo.  Luckily it was less than a mile off the freeway 🙂  Crawfish Town in Breaux Bridge LA is just awesome.  We took the rental car down, loaded it into the back of one of the trucks and then drove them back to Chattanooga.  This was Anne’s first ever solo run (even though I was right in front of her).  It was a bit weird but it was kinda nice for me to get to drive the day shift.  Since we were driving as solo’s, we could not make the 820 mile run straight through and had to stop for the DOT mandated 10 hour break.  That is what would suck the most driving solo.  Even if you were just 50 miles short of home, you could not drive anymore if you were out of time.  We dropped the one truck then had to go to a towing company with a flatbed tow truck to get the rental car out then dropped the second truck.  We were supposed to do two round trips and pick up two more trucks but they are not ready.  We will do it if the truck is not fixed I guess.

We LOVE living in Chattanooga.  I am sure we will love it more when we have an income. 🙂

All Loaded and Ready to Go 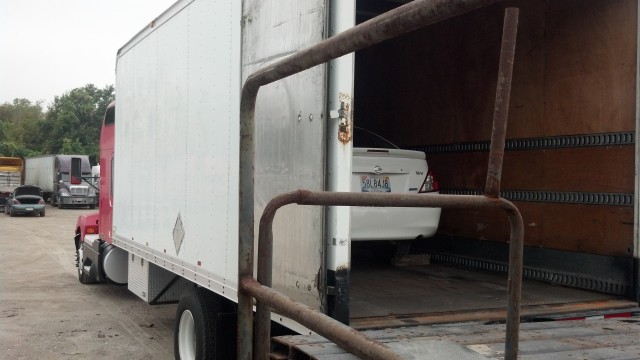 In the back of the truck